Home for the holidays

First off, major apologies from Chefette to all her Loyal Readers for not having posted these past couple of weeks. All she can offer are the traditional excuses for this time of year, namely: (a) the Christmas preparations took over my life for the week of the 19th (get tree, get food, buy pressies, have friends over for dinner, etcetera, etcetera), and (b) the husband was home from work for several days before and after the 25th, so had to spend time with him on Vitally Important seasonal tasks like playing Scrabble and eating Terry's chocolate oranges in front of the telly!

Fortunately, it hasn't all been candy and junk food. The husband took me out to a wonderful Christmas day lunch at Pont de la Tour. Sorry to make you all jealous, but here goes ...

We got a beautiful table by the picture window overlooking the Thames, with views of Canary Wharf, St Katherine's Dock and the Tower of London. Then came a complimentary glass each of Pol Roget champagne, Santa hats for the pair of us, and crackers to pull. The wine list -- as we had been forewarned -- did not have much selection in the budget range, but the wine waiter gave an excellent recommendation at our (slightly higher than usual) suggested price point-- a 2003 white Burgundy, which went splendidly with the food. Mind you, the husband commented later that as a sommelier he should have been able to confirm the ingredients of the sauce of our main course in response to a question. But that was only a minor niggle in an otherwise fabulous afternoon.

I was the more fortunate on starters. My game terrine with toasted Poilane and cornichons had just the right balance between chunky morsels of pheasant and velvety smooth liver paste, whereas the husband's crayfish cocktail was ever so slightly unexciting. For the main course, however, we both lucked out with the Lobster Thermidor. It was sublime. A well-judged portion size served with just the right amount of buttery sauce, garnished with earthy, truffled boiled potatoes, and a dark green, mellow flavoured kale. Puddings were also quite tasty: a chocolate 'buche de noel' (which was a bit too large to finish), a chocolate fondant pudding with mint chocolate ice cream. All rounded off with coffees and mini mince pies (on which the pastry was so fine and buttery that I made the husband stuff the uneaten ones into his jacket pocket to smuggle out!)

As for my own cooking, I've kept my hand in a fair bit during the school break. Made a deliciously light Christmas breakfast of smoked salmon and scrambled eggs garnished with chives, which went down very nicely with a glass of champers. I also did a fair bit of gift cooking to give to friends. Most successful were the orange and cranberry muffins, which I improvised from a basic muffin recipe garnered from my work placement (using yoghurt rather than milk). Least successful were the cheese straws made with store-bought puff pastry. They tasted fine coming out of the oven, but went stale far too quickly.

Anyway, I've got a big cooking challenge coming up in the next few days, namely a drinks party for the evening of the 1st Jan. We are having friends round for 3 hours of canapes before heading off to a nightclub in celebration of turning the big 4-0. (Canapes for 30 people? What was I thinking? Am I mad???) Seriously, though, I'm looking forward to it, and feel like I'm up to the task, of getting well organised beforehand. Have even got disposable piping bags-- I feel ready for anything!

Will let you all know how it goes at some point after the 2nd of January. Happy New Year!
Posted by Mem at 5:01 pm No comments:

The real world (sort of)

Chefette got her first taste of a real kitchen up close and personal this week. So much has happened in the first week of the work placement. Where on earth to begin??

It's all a big change from school, of course. And one that highlights in spades the massive gap between competent home cook and seasoned professional chef.

To start with, irony of all ironies, the station I had for the first 4 days was (you guessed it ......................) pastry. When I realised that's what I was going to be doing for a few days, I have to confess my tummy tied itself into a wee knot with dread. But it was all for the best in the end, as the pastry chef turned out to be a really great, down-to-Earth gal. She's South-East London through and through -- in a good way (on the 'cheeky cockney' end of the spectrum, far removed fom 'chav-ette'), and lives less than 5 minutes drive from our flat. Best of all, she's already given me a tip for a good butcher that's not too far away, who's got great lamb chops.

The other chefs have been pretty good to me, too. Despite the fact that they think I'm Positively Bonkers for leaving investment banking to go into food service. So despite a few terrifying moments -- i.e. , those very brief seconds when I've been alone on my section -- it seems to be going fairly well. At least I haven't completely humiliated myself. Yet.

What floors me is how often they cook from knowledge rather than actual recipes (the sole exception being the pastry station, where everyone has to weigh up accurately). Chef will say, "Knock us up a nice mango salsa", and you have to know what ingredients you've got to hand, and what your quantities/ratios need to be. It has hit home that I'm going to have to start benchmarking both quantities per serving and ratios of recipes (rather than actual amounts) in school if I'm going to be able to create instinctively during a busy service.

Another enlightening truth that has revealed itself is the sheer shortage of everything. Cutting boards, clingfilm, knives, containers and good serving platters. All are sought after and hoarded at various points during prep and service. As far as I can fathom, there is only 1 pastry brush in the whole of the kitchen where I'm working. (And a pastry brush is one of the most useful tools for any station.) On my second day, I overheard Chef asking for a pastry brush, and I told him he could use mine. Since then every day at least once, if not two or three times daily, chefs come to borrow my pastry brush. How amusing! At least one area where I'm welcomed in the kitchen.

Anyway, must dash to get my own dinner on the table. Anyone who wants to know about my trials and tribulations on muffins or meringue baskets can ask me when they speak to me next. 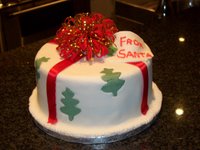 Chefette is relieved to report that she passed her Practical Exam from last Tuesday. Hoorah! A real weight off my mind, since Chefette can admit that things did not go brilliantly on the day. To whit: (a) my first pastry attempt was rubbish (very streaky, butter not rubbed in nearly enough), and so I had to remake it, thus losing half an hour of time; (b) I didn't really get to cook my stew for long enough; and (c) with having to remake the pastry, I barely managed to get everything done in time for service. At one point I truly thought I wasn't going to be able to make it, but somehow I managed to scrape 15 minutes together at the end to correct the seasoning and consistency of my gravy for the stew, cook my carrot batons, and finish assembling and garnishing my vichyssoise.

Tuesday was one of those days when I felt like I should never have gotten out of bed. Not only was it exam nerves. The bad luck continued after the exam was over, when I managed to scald my thumb with boiling water from a hot kettle. Ironically, I didn't burn myself in the kitchen during the exam. I managed to do it after the exam, when I was making a cup of tea in the dem room. Go figure!

And of course this happened on a day when there was a burst water main outside the school, so there was no water from about 3 hours into the exam. No way to go to the toilet, let alone douse cold water onto a kettle burn. (Fortunately the school's first aider managed to get an ice pack on my hand, so the burn is already starting to heal.)

On the positive side, it wasn't only me who was having difficulties on the day, and it was a relief (and also quite funny) to hear some of the other students horror stories from their exams. One classmate managed to burn her stew. Another had to remake her pastry because she forgot to put the baking beans into it before baking it blind (it collapsed on itself in the oven). One lady accidently put her oven 100 degrees centigrade hotter than it should have been. And another poor girl forgetting entirely to prepare and serve her carrot batons. And still another girl forgot half her uniform, and had to borrow someone else's trousers who was at least 2 sizes too small for her. The list goes on ...

As for the Theory Exam from last Monday, the powers that be are still marking it, but I'm pretty confident that I did enough to pass that one (touch wood... ). Should get something in the post in the next 1-2 weeks.

Before I sign off, I'll try to add a wee photo of my Christmas cake. It has taken some damage from being brought home on the Tube in a soft-sided container, so try to imagine the finish looking a little sleeker.