A tale of two puddings

Chefette has just finished a very successful week in the kitchen, and she's looking forward to a three day weekend (no school on Monday), so she's celebrating at the moment with a little glass of Cordon Negro bubbly. Delicious!

Mainly, I'm feeling a big wave of relief. After so many days during the first 4 weeks of feeling under pressure and under competent, this week was a major step forward. The first good omen came on Monday when the pastry gods smiled on me, and I didn't have to use my Disaster Pastry from the previous Friday. Someone my group was off sick, so one of the nice instructors -- who'd seen the Disaster Pastry -- said I could use theirs. Then I had 4 straight days of hitting my service times, without any cooking gaffes. My grilled mackerel with gooseberry sauce was even deemed "perfectly cooked". And to cap it off I'm even getting along a little better with Shwombo (although we weren't cooking on the same table this week, so that probably helped...)

Best news of the week came on Wednesday, when I had my mid-term assessment with my tutor, the unflappable Irishman. I didn't know what to expect, and to be honest had been secretly worrying that I wasn't doing well enough (having made some pretty basic mistakes like burning onions that were meant to be sweating down!). Fortunately, my fears were relieved. On a scale of 1 to 5 (1= worst, 5=best), I got mostly 4s and 5s (5s in white sauce, mayonnaise, timing and temperature), so am feeling a bit more confident that I can hit the required standard by the end of the term. The Irishman also made some encouraging noises re my organisation and hygiene, and said I will definitely have more chances to improve pastry and presentation, my two weakest areas.

Anyway, from the title this blog is supposed to be a tale of two puddings, so without further ado ...

Pudding 1: For years, I've never been able to make a Yorkshire pudding because whenever there was a roast involved, one of my husband's relatives from Yorkshire always did it. Mother, father, aunt and uncle -- I've eaten all their puds (including some of them cold with Lyle's golden syrup for breakfast on Boxing Day). But have never managed to make my own. Until today. And lo and behold, it turns out I must have absorbed some knowledge from the family experts, seeing them do it over the years, because mine came out the best in the class.

Pudding 2: We had a dem yesterday on gelatine, and one of the recipes made was a delicious Kir Royale jelly. As those of you who know of my great fondness for alcoholic jellies and for kir royales can well imagine, I was drawn to that particular recipe like a moth to a flame, and vowed to make them at home that evening to bring to a friend's birthday party on Friday night. After walking all the way to Tesco, imagine my despair when I found they had every ingredient except gelatine. So I had to wing it, and instead of making the recipe with proper creme de cassis and gelatine leaves, I had to substitute Basset's blackcurrant jelly cubes! The mixture didn't taste too dire, and so I've prettied them up with fresh raspberries and mint garnishes, and am bringing them to the party tonight.

On that note, I've gotta dash and get ready for the party. Great weekends all!
Posted by Mem at 5:37 pm No comments:

Pastry on the brain

First of all, fantastic news -- passed my first test at school, waa-hey!! Got 84%, so feeling pretty chuffed about that.

Also have to mention last weekend, had a fun night on the town for Eve's hen party (evidence below). After a few weeks of being sweaty in hot kitchens and cycling to and from school, it felt great to be able to get my hair done and put on a party frock. Thanks again for organising that one, Kay. 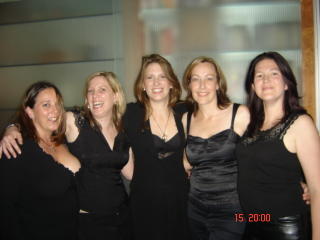 Bad news is that I had another pastry nightmare today. ARGH! Managed somehow to get a large, u-shaped crack in it at the very last stage, and my attempts to patch it wouldn't hold. Tomorrow, I'll make a morning sacrifice to the pastry gods in a last ditch attempt get a brainwave on how to fix it. Honestly, it's frustrating for all of us in class, because it's so hard to the pastry thing nailed down. Basically, it's difficult to know how much water to add after rubbing the flour into the butter-- each batch of flour and butter will 'take' a different amount of liquid. The last one I did turned out fairly well, but this one is dire, and for the life of me I cannot figure out what I did differently.

As you can imagine, with all this frustration over pastry and with everyone trying to improve their multi-tasking, tempers in the class are starting to fray. And not just because of pastries.

One particular person in the class is really managing to annoy me, and a few others who she's been grouped with. To be frank, she's a bit of a 'shwombo' (She Who Must Be Obeyed). You know the type, always giving instructions to other people what they need to be doing, emphasizing to you all the time that she's only trying to be helpful, and managing to whine if every little teeny, tiny thing isn't done her way.

But I am determined to stay strong and keep focused on my own learning.

Am off to Paris this weekend. Think a couple of days downtime from the kitchen will do me some good, and reenergize me for next week. I shall be concentrating not on cooking (as our cooker was damaged by the leakage), but on eating. Mmmmm.
Posted by Mem at 7:06 pm 1 comment:

Chefette has certainly had to buckle down this week! Revising for exams, digging deep into the emotional reserves, and -- above all -- subjecting herself to The Discipline Of Mise En Place. Otherwise known as MEP. Or, as Anthony Bourdain would say, 'your meez'.

For the non French speakers, MEP literally translates as 'put into place'. It's basically about getting all your equipment and ingredients for the task at hand organised and ready to go. And it's one of those things I'd thought I was getting pretty good at at home, having learned from a few unfortunate mishaps over the years. Oh, how naive!! Home conditions are miles away from a commercial / instruction kitchen, and it's easy to forget steps or miss things out when you're rushing against the clock to prepare and serve a full English breakfast, a treacle tart, and a beef stew -- and do all the associated cleaning -- within 3 hours.

The inseparable corollary of MEP-- also an integral part of Kitchen Discipline -- is 'working clean'. By that I don't mean turning up in pristine chefs whites, and having good food hygiene, although those are certainly part of it. What I mainly mean is having your workspace as clutter-free as possible. Think minimalist zen rock garden, as opposed to English country cottage garden.

Of course, these two rules -- having everything at hand, and being as clutter-free as poss -- are essentially in opposition with each other, so getting the right balance is an art form as much as a science. And boy, am I struggling to get the balance right.

One thing I am perfecting is the Art of the 3 Bite Lunch. I've been on the late side of service quite a few days this week. ('Service' = serving your dishes to the instructor, and getting his comments on your food.) When you're cooking in the morning, if you can serve before 12.45, you have a good hour to eat lunch, wash up, get changed, and get yourself down to the demonstration room. But if you're serving at 1.40pm, you've got less than 20 minutes to do all that. So I'm mastering the art of, when running late, taking 3 ginormous bites of whatever I've cooked and making it suffice for lunch. Yesterday it was three profiteroles filled with cream and topped with chocolate sauce. Today it was three mouthfuls of fish pie. Not terribly glamourous, but effective!

That's pretty much it, except to say I'm hopeful that I've hit the pass mark on my exam last Wednesday. Wish me luck.
Posted by Mem at 6:20 pm 4 comments:

Hopefully I'm turning the corner on pastry. Had a good one today, hoorah! (Moment of serious relief with treacle tart when I saw that at least 4 tart cases had leaked, but mine held all the filling intact.) Also my meringue remake was much improved.

Next Wednesday I have my first written test, so I'll have to study for a while on Sunday and Monday. Keep your fingers crossed for me.
Posted by Mem at 12:13 am No comments:

Another very busy week almost over. Still feeling exhausted at the end of each day, but I'm starting to settle down into the routine of it all.

I arrive early in the morning to try to beat the changing room scrum. There are as many as 30 of us in a space smaller than my bedroom at home, with no chairs or benches, and lockers stacked 3 high along two walls. Everyone's trying to juggle bags, uniforms, books, food containers, electric scales and knife rolls without bumping into each other and without losing track of their keys, egg whisks or piping bags. Needless to say, there's no door to the ladies changing area, so there are always a few unfortunates who have to can only change just inside the doorway, in full view of any one passing through the corridor. Anyone on their way to the toilet at around 9.20 in the morning would see as much thigh meat on display as a Kentucky Fried Chicken counter. Madness!

Tuesday night I had the first of two food hygiene classes from the Chartered Institute of Environmental Health. I now know far more about bacteria than can be shared in polite company. (I'll spare you discussion of the symptoms of staphylococcus aureus.) Some of the presentation was boring common sense. (Wash your hands.) More enlightening was the contaminants bit. Turns out one of the major UK supermarket chains has on 6 separate occasions had complaints about pen caps found in ready meals.

However, the real gross-out story came not from the environmental health officer, but from one of our instructors, who was emphasizing the importance of boiling your frozen raspberries before using them in a coulis. She knew of a catering organization that had served a dessert with raspberry coulis, only to find out that the guests who had eaten it all fell sick. Naturally, the caterers investigated thoroughly to try to find the source of the contamination. After testing the coulis ingredients, it turned out that the frozen raspberries -- which had been picked in Bulgaria -- had been urinated on. Ugh.

Cooking-wise, the only things to have caused me headaches this week were pastry and meringues. With pastry, I can rub butter into the flour beautifully, but can never seem to figure out the right amount of water to add. Meringues today were also slightly disheartening. Everyone at my table managed to get stiff, beautifully piped white rosettes with the merest blush of pale biscuit colouring. Mine looked like soggy blonde dog turds in comparison! Fortunately, I've had a good shepherd's pie, a delicious mushroom soup and a beautiful quiche lorraine this week, so all is not lost.

Wish Chet-ette luck with her meringue remake tomorrow.
Posted by Mem at 7:27 pm No comments: